Would you like one of these? Bad luck. They just sold out.

As if you needed another term to join the ranks of supercar and race car, you now need to keep an eye out for the ‘hypercar’. What the heck is a hypercar? That’s a great question. We had no idea, so we went to the depository of all wisdom, Wikipedia:

“The Hypercar is a design concept car developed by energy analyst Amory Lovins at the Rocky Mountain Institute. This vehicle would have ultra-light construction with an aerodynamic body using advanced composite materials, low-drag design, and hybrid drive. Designers of the Hypercar claim that it would achieve a three- to five-fold improvement in fuel economy, equal or better performance, safety, amenity, and affordability, compared with today’s cars.”

So the boffins over at Koenigssegg have been busy little bees over the last couple of years turning their concept show car into a real-life, living, breathing hypercar for their rabid fans out there. After receiving an incredible reception at the 2015 Geneva International Motor Show, Christian von Koenigssegg and his team put this bad boy into production. Releasing only 80 of these cars for sale, it’s certainly something of a rare delight.

The Regera, as it’s named, comes from the Swedish word ‘to rain’. Well, here’s to raining PURE AWESOME! The beast is so unique, it doesn’t even feature a transmission; at least, not as we know it. Instead, its Direct Drive system sends pure grunt to three separate electric motors which will take you from 0 – 100 kph in 2.7 seconds, reaching its top speed of 400 kph in less than 20 seconds. Yes, 400 kph. That is bonkers, there’s no doubt about it.

With 1,500 horsepower produced across the three motors, the car is actually incredibly light. In fact, according to Car Buzz:

“The battery pack only weighs 66kg with coolant, resulting in a power-to-weight ratio of over 10-hp per kg of mass, which has never been seen in a road-legal electric drive system prior to the Regera.”

The active chassis, active aerodynamics, active ride height front and rear, active shock absorption, and hydraulic bodywork make the car not only comfortable to drive, but easy to operate. Comfort, speed and performance are all a top priority for Koenigssegg, and it appears that nothing has been sacrificed.

They’ve even incorporated an infrared layer over the dash display screen, so that you can use the touch-screen with anything (your finger, a stylus, your McMuffin). Hydraulic lifting doors and plush leather interior will make you feel like Sean Connery; you’d almost expect a secret panel which holds your exploding ballpoint pen, Beretta 418 and the occasional Bond girl. 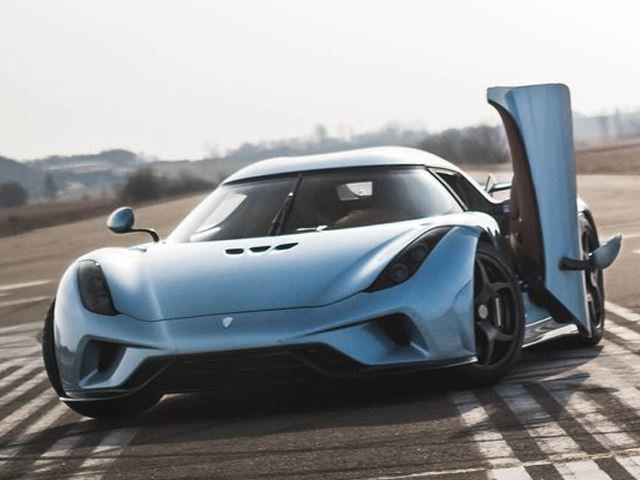 Article Name
Would you like one of these? Bad luck. They just sold out.
Description
Koenigssegg have been busy over the last couple of years turning their concept show car into a real-life, hypercar for their rabid fans out there.
Author
Maggie Harris
Publisher Name
Machines4u
Publisher Logo