Watch as a 3D Concrete Printer Builds a Castle from Scratch!

3D printers have been on the scene since the 1980’s, when Dr Kodama of Japan developed his first Rapid Prototyping (RP) device. Unfortunately Kodama, a patent lawyer, did not successfully submit his full patent paperwork before the deadline! Doh!

Subsequently, other clever folk went on to build upon his original concept, and today, we are blessed with the modern 3D printer. Keeping the kids busy printing lego, model cars and…hand guns, 3D printers are becoming increasingly advanced.

Nowadays, not only are they capable of printing in plastic—they can build you a concrete structure as well! As Minnesota man Andrey Rudenko proved, all it takes is a little trial and error, and you can create your own concrete castle!

“We are front runners in development and implementation of portable 3D Concrete House printers. Our company was the first in the world to create and develop the first portable 3D Concrete printer for on-site printing, and was the first in the world to print a fully-operational commercial building, printed as a solid, single-piece unit. We have developed an entire new Construction System based on 3D Concrete Printing Technology principles, using thermal mass, heat storage and solar energy.”

Two years of programming, overcoming extensive tuning and refining requirements—this was no task for the faint of heart. Experimenting with different concrete mixtures and tackling the dreaded clogged extruder, Andrey was finally able to complete his medieval masterpiece.

Despite the success of his build, Andrey admits that there are improvements still to be made. He is already undertaking prototyping of a new castle design and working towards printing the entire structure in one piece.

“Printing the castle turrets by themselves was a bad idea as they were extremely difficult to lift and place. Additionally, I’ve figured out how to print a roof; the only thing is that the material I’d print with would have to be used in warmer climates for now.”

His next endeavour will be to build a full-scale and liveable house with his 3D printer. Meanwhile, his company Total Kustom are developing and manufacturing 3D printers and technology with an aim to create affordable, sustainable and zero-impact housing. The Rudenko 3D concrete printer is available to investors who wish to support these kinds of projects.

“The new 3D technology allows us to implement completely new architectural ideas in construction and it is remarkable how we can vary the current architectural structures of homes. With this new technology, it is possible to print limitless amounts of classical décor as well as brand new elements and shapes, whereas previous technology made innovative constructions difficult and expensive.” 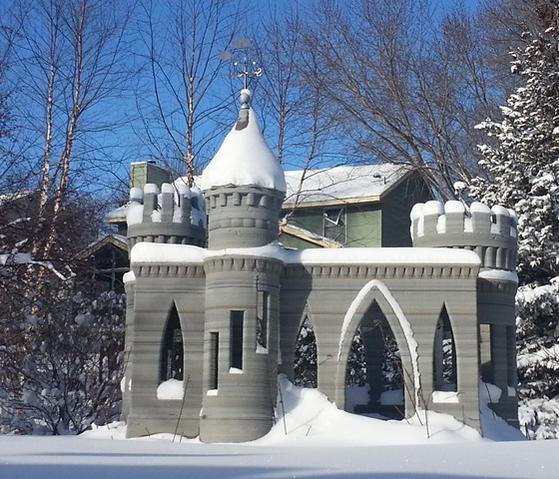