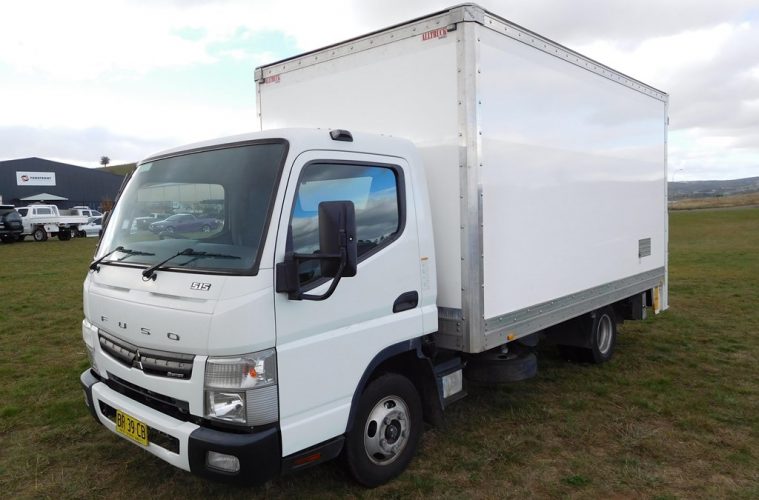 The availability of car license trucks during the last few years has certainly attracted more investors in the trucking industry today. After all, the chance to enter one of the most stable markets in Australia through these more compact 4-wheel drives allow contractors more flexibility and a lot of other upsides that they can work with as they venture deeper into the trucking market. In today’s review, we’ll be featuring another truck that’s been quite popular among light truck operators during the past few years: the 2012 Canter 515 Commercial Truck by Mitsubishi Fuso.

The 2012 Fuso 515 is backed by a 3.0 litre four-cylinder turbo diesel that makes 110kW and 370Nm that can quickly power up when you start the machine. The 515 also showed great efficiency during out tests, consuming 12L/100km during our run. For previous Fuso users, you might have noticed the drop from 4.0 litre to 3.0 litre, but it this looks like a downer on paper, the move actually came in as part of the company’s innovations that are in line with Japanese standards. The 3.0 litre engine produces less emission while also featuring a much-improved fuel economy.

The 515 also features a Duonic dual clutch automated manual, which changes gear quickly and easily. It does about 2200 rpm at 100km/h and is actually well behaved on the road and in traffic. Meanwhile, 515 comes standard with a suspended driver’s seat and an upgraded, and modern sound system with a touch screen, AC, dual airbags, two cup-holders, and an average fuel use calculator. The 2012 did miss out on cruise control, but one thing I really like is the cabin’s ergonomically designed dashboard that makes access to the controls and instruments much easier than the truck’s previous versions.

The truck boasts of a pretty massive tray at 4290 mm front to rear and 2282 mm side to side which is definitely bigger than most of its class. Most of Canter’s parts are from and made in Japan, but the tray made of a mixture of metals came from Thailand. One thing you’ll immediately notice is the heavier frame that’s designed to offer more strength and durability. So if you wanna upgrade from a ute to a more capable workhorse, the 515 does offer plenty of upsides you can work with even as a newbie in the industry.

The 2012 Fuso 515 also includes an intuitive design that is paired with its improved robustness and versatility. The serviceable parts have been placed more accessible for easier maintenance and regular check ups on the operator’s side. In addition, the Fuso has incorporated several safety features and components that are both in line with Australia’s local standards and Japan’s latest innovations in the truck manufacturing market.

The 2012 Canter 515 Commercial Truck by Mitsubishi Fuso offers a straightforward and practical solution for operators who just can’t seem to get enough from their utility vehicles. The truck also comes at a good price and the fact that you can kick off your operation right away since it only requires a standard car license. In addition, despite being slightly dated, the 515 does provide a solid set of standard features that can also be complemented and improved through minor upgrades if ever you’ll need to get more out of the 2012 Fuso Canter 515.