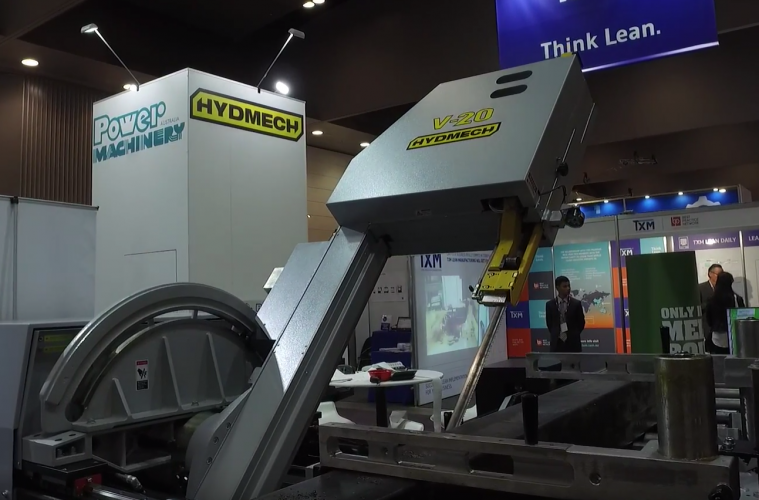 One of the more unique machines at Austech 2017, the team at Power Machinery had the HYDMECH V-20 on full display during the expo. We spoke with Ken Christensen, Director of Power Machinery, to get all the latest on this new tech.

Imported from the US, the V-20 is a band-saw configured with a unique overhead crane system, which allows for material to be dropped directly onto the machine bed. What’s the benefit? According to Mr Christensen, the feature brings improved efficiency and convenience.

“The blade guide height is fully adjustable and given the way the bow tilts when you want to mitre from left to right, It’s much faster than a conventional saw, which has to swing through a bigger arc.

This machine also utilises a mist lubricant system as well. Which is why you might see very little coolant splashing around”

Whilst vertical bandsaws may not be replacing their horizontal counterparts anytime soon, there’s no denying the efficiency for mitre cutting and volume of material able to be cut by the machine.

One of the best features by far, the machine is also advertised to consume 2/3 less energy than more traditional machines. This is attributed to it’s on demand hydraulics combined with a constant torque electric feed control. Whilst semi-automated vertical saws have been used for a little over 15 years in the US, it’s interesting to know that the technology is somewhat new in the Australian Market.

“In Australia we’ve found there’s a little bit of learning for people about the concept, more than worrying about the brand and type of machine. We’re gradually bringing people around to that and the idea’s really starting to take off.”

Equipped with a Windows Touch Screen controller, this band-saw also allows for reduced training time and operator errors. The latest in controller technology, the Windows integrated system is an icon driven interface, featuring pre-programmed routines for simple shapes and also allows users to save up to 5000 custom routines. 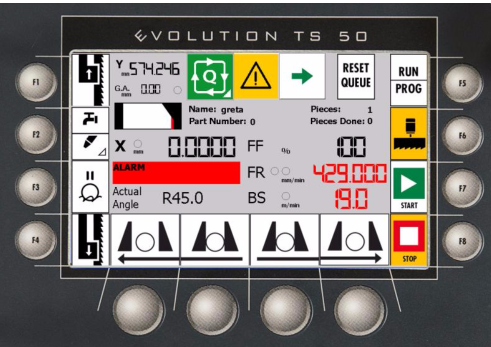 Power Machinery is currently the only distributor of HYDMECH and MEP machinery in the Australian Market and has represented the company nationally for 35 years. What is more, MEP is generally considered to be the first company to introduce swivel head designed saws into the machinery industry and are currently developing the next generation of auto feed saws.

I think the next thing we’ll see is the bigger range of double mitre auto feed saws. We’re already doing that on smaller machines and I also think we’ll see more improvements in control systems.”

Overall, Power Machinery’s choice to showcase the V-20 at Austech this year appeared to be a hit with visitors. The semi-automated technology has all the potential to provide new solutions for both specialised and general application, especially for heavy-duty cutting purposes.

Article Name
Why You Should Be Using A Vertical Band-Saw For Your Mitering Jobs
Description
One of the more unique machines at Austech 2017, the team at Power Machinery had the HYDMECH V-20 on full show at the expo. We found out all the details >>>
Author
Josh Parreno
Publisher Name
Machines4U
Publisher Logo