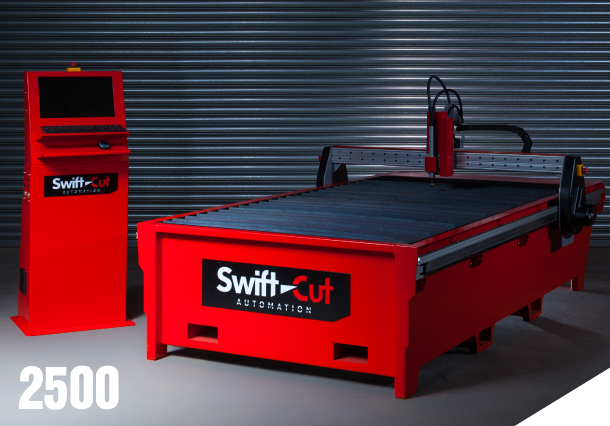 The plasma-arc cutting process started to hit commercial markets during the early part of the sixties. Before then, the technology had been mostly used to weld materials in the previous World War. The process failed to gain much following during its early days, primarily because it was costly and still inefficient that time. All of that, of course, got better through constant innovation and development, which is best showcased by the strong standing of the CNC plasma cutters in its current market. In this edition of our product review, we’ll take a closer look at one of Swift-Cut’s latest offering in the market, the Swift-Cut 2500.

The Swift-Cut 2500 comes with a standard freestanding operator’s console which allows the user to still keep full control of the machine’s operation even when distance is required. The setup also keeps the operator in a safe spot and lets him manage the tasks in more convenient ways. The built-in PC and 18.5” flat panel LCD monitor also has a wireless keyboard and mouse for ease, 500GB hard drive, 4GB ram, plus an E-Stop safety button and easy access for maintenance.

The Swift-Trace system starts from line-drawings into cutting your design in four simple steps. The magnetic camera mount fits to the cutting head and is used to scan the image, then the file will be imported into Sheetcam and processed for production. The system also significantly increases the machine’s accuracy and overall efficiency in the workplace, which should be a strong factor when considering the next plasma cutter that could be added to your workshop lineup.

The Swift-Cut 2500 is one of the newest equipment I’ve seen in the Hare and Forbes Machinery House, which is part of the reason why I took it as the subject for this review. But aside from that, the machine features a durable and exquisite design that is also complemented by the cable covers and trays which remove the fear of tripping over any loose wires. Furthermore, the plasma cutter is made with fitted forklift holes into the base so that it can be easily moved when needed. And of course, the robust steel frame lets the equipment operate steadily and its full potential even between some of the workshop’s heavy-duty tasks.

When it comes to the Swift-Cut 2500, the additional components offer some very interesting prospects, often highlighted by the Swift-trace system. But aside from that, the automated SwiftMark also seems like a productivity-inclined add-on that should be one the prime options that the operator can purchase onset or somewhere down the road.

Summing up, the Swift-Cut 2500 displayed a pretty solid amount of upsides that should make it a worthy consideration for workshops and businesses that are looking to expand their lineup of machinery in the foreseeable future. The equipment offers a lot of market-average features, but the software and the optional components can certainly push the 2500 plasma cutter to a higher level by improving efficiency and operational versatility.