Robotics is an exciting field of innovation for many industries—none more so than farming. Automating previously tedious tasks, working alongside farm workers and increasing the efficacy of crop monitoring are just some of the benefits of robotic innovation in agriculture. SAGA’s new robot, ‘Thorvald’ will soon be helping strawberry farmers to monitor, weed, pick and manage pests and disease. Here we take a look at what Thorvald can do, and what the implications are for farms of all kinds.

Who likes weeding? Nobody. Weeding crops is not only time-consuming but expensive. Few farms can afford to manually weed their crops, and yet, the use of herbicides can also be a burden to the budget (not to mention, the environment). Thorvald can be programmed to distinguish weeds from crops, and can also remove them by hand (or robotic arm, in fact). This saves farmers the need to use herbicides, and also saves cold hard cash, as labour is saved which would normally be employed to apply weeding treatments.

Prevention is better than cure, as they say. Proper monitoring of crops can be just as time-consuming as weeding, if done manually. Thorvald is equipped with cameras and sensors which can monitor the condition of plants, and even detect early signs of plant stress. With the ability to run all day and night, if needs be, Thorvald can keep a close eye on crops without the added cost of man-hours.

Mildew can be an issue for many crops, including strawberries. Thorvald has been designed to initially service strawberry farms and similar small crop varieties, and has a particular focus on preventing and treating mildew. Using an attachable UV light, the robot can treat crops around the clock. Once again, this has the potential to save farmers a great deal of labour costs as well as the cost of damage from mildew. Operating at night is most effective for UV treatments on crops, and it also gives the local bee population a break while they sleep. The amount of UV exposure can be adjusted for each crop, depending on its particular needs.

Unlike heavy tractors, the lightweight and nimble Thorvald doesn’t compress and ultimately cause damage to the soil. At only 200kg, this robot can also navigate the tight spaces between strawberry or raspberry rows with ease.

While seasonal pickers will still be required for harvesting, Thorvald can assist by transporting carrier cases to make it quicker and easier for labourers and farmers to harvest their crop.

Thorvald will start being delivered to those who have pre-ordered shortly, according the SAGA website, and will be able to assist on strawberry, raspberry, and cucumber farms, among others. The Thorvald robot also comes in 3 different series:

The W or ‘workhorse’ series utilises 4-wheel drive and 4-wheel steering, as well as souped-up motors for enhanced performance in energy-demanding tasks. This series is designed to work in challenging landscapes, and for extended periods of time.

This compact series is designed to assist in small or indoor environments such as greenhouses and tunnels, where space is at a premium. A skid-steer and one-wheel regular steer version are available, and each can be customised to fit into different scenarios.

Equipped with small wheels to navigate narrow rows without coming into contact with plants, the R series Thorvald variations are designed to make monitoring plant growth and phenotyping a breeze. They are built higher than the W series models, in order to reach higher-growing plants and also to ensure that they can reach without disturbing plants which are being researched. 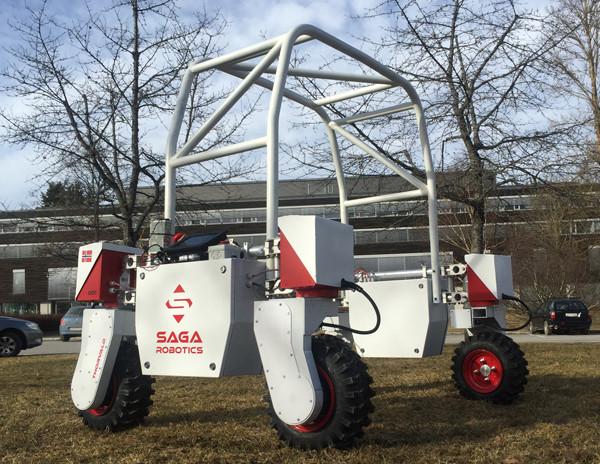