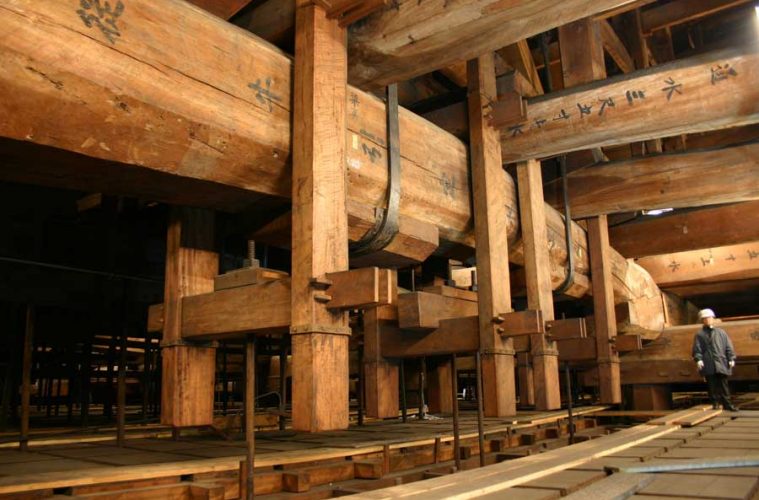 Japanese architecture appears simple and purposely so. Their aesthetics harmonise development with nature, but the techniques beneath the structures are distinct and complex, utilising joinery ingenuity to create buildings that do not rely on nails or bolts.

Japanese wood joints form the foundations of the nation’s great temples, houses and cabinetry, designed with joinery techniques that are still being studied by contemporary architects today. These designs are able to utilise joinery that does not require steel nails but still forms sturdy internal structures to huge buildings, while presenting amazing visual constructions within the room’s ceilings.

Traditional Japanese aesthetics incorporated wood as the chief building material for a number of reasons. The nation was gifted with a myriad of timber resources and the light weight of the material made it a favourable alternative to stone or brick as earthquakes regularly battered the country’s coast and rural areas. The joints had also been designed with this threat of earthquakes in mind, able to withstand the jolts with flexibility that other rigid construction materials could not offer.

These joints suited the Japanese minimal aesthetic that had been inspired by early Taoism, but this simplicity was a deceiving perception. The complexity behind Japanese woodworking joinery has often been described as geometry meets nature, an exceptionally well thought-out process of attaching wood pieces to form stable structures. Japanese architecture was never too far from nature, and the character it added to traditional buildings is a stark contrast to the westernised monoliths that cover the nation’s urban areas today.

Many Japanese carpenters have remained loyal to the old crafts, continuing to utilise traditional joinery techniques in contemporary furniture and woodwork projects. The country manages to produce supreme woodwork techniques and woodwork tools by honouring the craft of centuries past. This same respect also extends to the nation’s lauded garden and architecture design.

“When someone would get a piece of work done, with the joints fitted perfectly and the proportions just right, he’d put it someplace where it could be seen … It was just an appreciation of fine work”George Nakashima, Pioneering Japanese-American carpenter

Luckily enough, the processes and secrets are now easier to understand, meaning the advanced techniques have become accessible for even non-professionals attempting DIY projects. These are some of the best woodwork techniques that are suitable for both Japanese and western projects.

The Mortise and Tenon Joint

The Mortise and Tendon Joint is a staple in the woodworking industry and has long existed in international woodwork techniques. The idea works just like a jigsaw that needs be pieced together. Mortise, basically meaning hole and Tenon, meaning thing-designed-to-fill-said-hole, should give you an idea of how this joint will come together.

The benefits of this type of joint are obvious. When making furniture these joints can be more aesthetically pleasing than just slotting a few nails through the wood, providing the final product with a simpler look but an internally complex design. But for different scale projects there are different types of mortise and tenon joints, each suited to serve a specific purpose.

Double and Twin tenon joints are exactly what they sound to be, two tenons side-by-side and best used for improving the strength of the single tenon joint, for the purpose of supporting a greater weight. The haunched version is used to stop wood twisting and has an extra piece of wood at the end of the tenon that is half the length of the mortise. For a guide on doing your own mortise and tenon joints, visit woodworkbasics.com.

Dovetails are the more flamboyant joints of the woodwork world, often appearing complex and difficult to pull off, but providing a firm locking structure and aesthetic appeal to furniture designs. This joint is divided by pins and tails that are designed to come together and interlock, making the design another alternative to added screws and bolts. These joints have been adopted by cabinet makers and carpenters for their sophisticated clean look, often used to create a set of draws or to form the corners at the base of furniture.

The previous two joints were commonly used in early Japanese woodworking, but they were not as unique as the Sampo-Zashi. The Sampo-Zashi was a culmination of existing woodwork joinery techniques, combining the simple utility of the Dovetail and the Mortise and Tenon to create extremely precise and elaborate joints. The joint relied on absolute precision in measurements, needing three or more pieces of wood to combine to a single post with exact millimetre measurements, and ultimately pinned and held together by wooden pegs.

The Sampo-Zashi is not exactly an entry level wood joinery. The precision required for the joint to come together without flaw is the type of skill reserved for the most experienced carpenters. Considering the complexity of this design and how regularly it was used to support large temples and houses, it survives as a tribute to the prowess of traditional Japanese woodworkers and their complete understanding of the nature of wood. 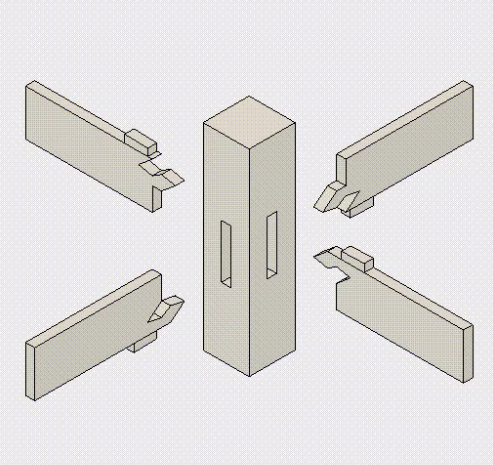 The Japanese did not only produce intelligent joinery techniques that didn’t require nails, they were also responsible for a wood carving technique that didn’t use files. It was as if the nation had become defiant to employing the techniques and resources of the rest of the world, sticking to their own methods that relied entirely on the skill of the craftsman.

Inami Wood carving is as intricate and time consuming as any trade technique could be, being used to decorate the huge temples across Tokyo with detailed wooden sculptures. Eventually these carving techniques spread forward to Japanese homes, nameplates and figurines.

The technique is very simple, but when viewing the portraits and sculptures that adorn Japanese temples, it’s hard to believe the level of detail achievable. The exceptional quality of Japanese woodworking chisels and wood carving knives have made the Inami wood carving style possible, but only just. By hammering the chisel into the wood canvas, the artist creates notches in a similar way that a painter creates brushstrokes, slowly working towards a final image.

If all of the above seems a little out of your skill set, Japanese lacquering techniques are both simple and can add a professional finish to any woodwork project. Most woodwork projects will reach their final form with the option of lacquer or paint, and for those undertaking woodwork projects like a chopping board or a wooden wine rack, leaving the grain unpainted will likely be the desirable option. These lacquer techniques can give your project that finishing touch as well as cover small mistakes made during the plane process.

This type of basic finishing technique involves spreading a transparent lacquer over the final woodwork product. This technique is a traditional one that includes steps such as ‘filter raw lacquer through linen cloths before wringing the liquid into a bowl’. While these initial steps are more reserved for the traditionalists, the later steps utilise whetstone as a polishing tool to smooth out any niggles or patches on the woodwork piece and to accentuate the grain before buffing.

This technique originates from its namesake, Kamakura, which was a hub for Buddhism towards the end of the twelfth century. This technique involves carving an image (traditionally a Japanese plant or flower) into the project before applying a special finish made from many layers of lacquer (often of several colours) that have been built up to a considerable thickness and then reduced.

Another method for lacquering woodwork projects, Fuki-Urishi involves constantly applying a transparent lacquer until a thin layer has formed over the piece. This coat will smooth out small divots in the woodwork piece as well as sink deep into the grain so that the lacquer cannot chip off. For someone looking to highlight an appealing piece of maple or oak, this technique is perfect for bringing out the wood’s natural grain and colour. Detailed how-to instructions can be found at akemisagawa.typepad.com.