The World’s Most Epic Bridges 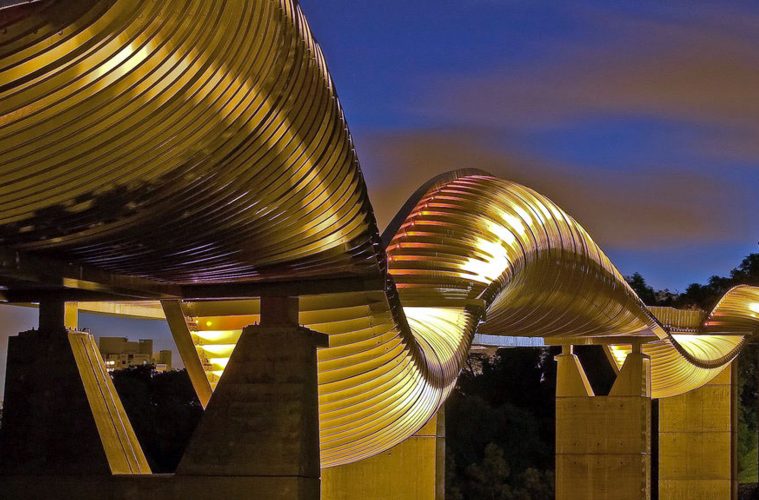 Humans are pretty damn cool. We’ve been down to the darkest depths of the ocean, left our planet’s atmosphere. One of us has even skydived from space. As a species, it seems, we are unable to hold ourselves back from testing limits.

Some of the most spectacular examples of this human drive to explore extremities can be seen in the world’s latest, high-tech bridges. As our design software and construction materials have advanced, so too has the craziness of the bridges made with them.

The best combine supreme functionality with unique architecture to enrich people’s lives both visually and practically. We’ve constructed a list of our favourites from around the world.

The Heatherwick bridge is like a 12 metre mechanical tongue that you can walk across when it’s uncurled. When there’s no-one there to tread its planks, the bridge curls itself up into an octagon, leaving the Grand Union Canal unobstructed for cruising boats and any potential MI5 spy chases.

Another resident on England, the Gateshead Millennium bridge is also designed exclusively for pedestrians and cyclists, getting them across the River Tyne future-style. The whole thing was lifted into place in one piece by an Asian Hercules II crane barge. It swivels like a giant eyelid whenever it needs to let a boat pass through.

The Netherlands: next level drawbridge

Apart from being a lot of fun to try and pronounce, Slauerhoffbrug is a Dutch tail bridge of epic proportions. Reminiscent of something you might see in an old video game (like Metal Gear Solid), the bridge’s single pylon lifts itself out of the way when boats need to pass beneath it. 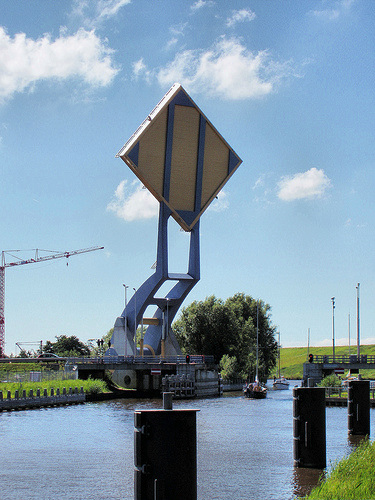 China has a thing for crazy bridges. One of the most impressive of their many unusual, high-tech designs is Jiaozhou Bay Bridge. At 26.7 km long, Jiaozhou is the world’s longest bridge, spanning the entire width of the bay.

Too big to fit in one shot. Image Credit: Feel The Planet

But, as well all know, it’s not just length that counts. China makes up for the shortness of its other bridges by upping the extremity of their design. The mysterious Dragon King Kong Bridge (also known as the Lucky Knot) was, for a while there anyway, merely a ghost of the internet.

CGI pictures of the swirly red construction abounded but, with no real-life images to be seen, the internet started to wonder if it was nothing more than an unrealised dream. Then, in late 2016, a series of photographs emerged from photographer, Julien Lanoo. If they aren’t real, they are damn fine fakes. 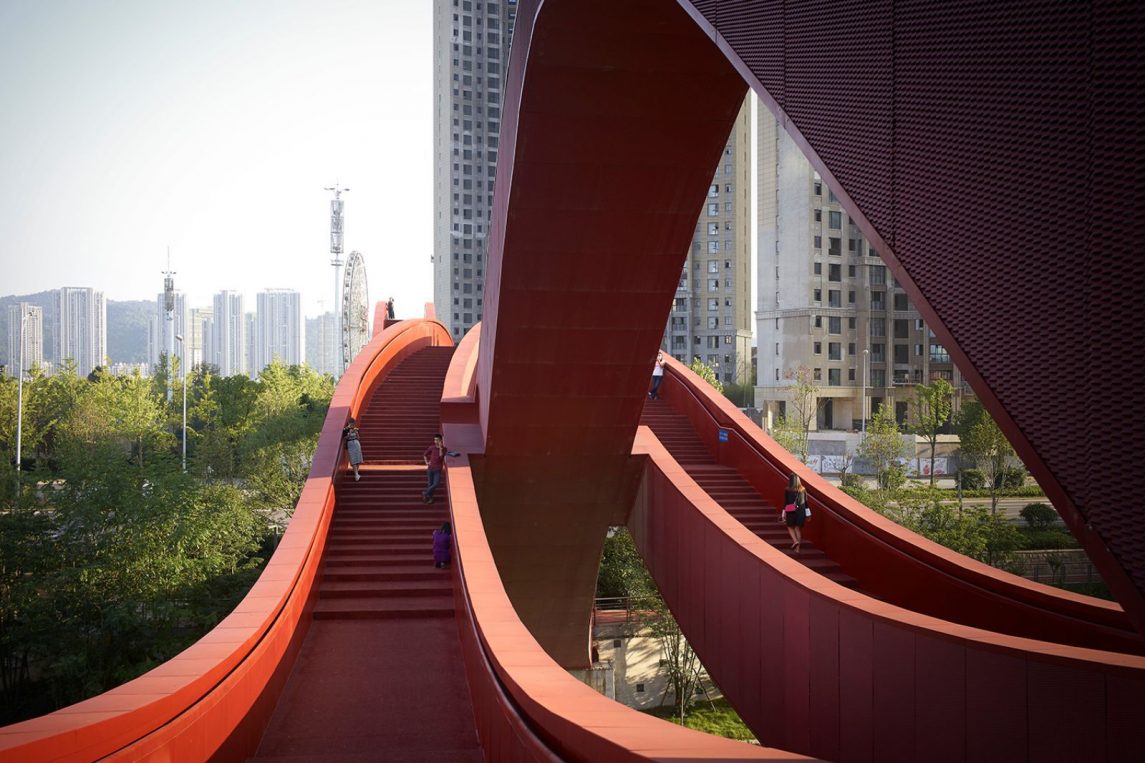 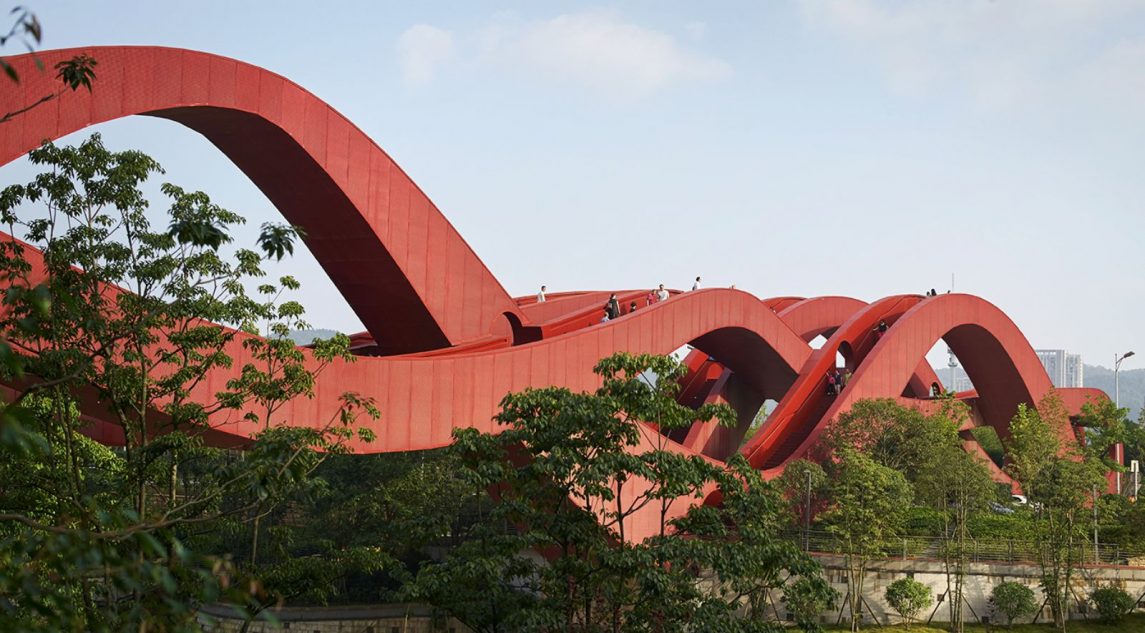 Random fact of the day: helices is the plural of helix. And Singapore is home to some impressive helices in the form of the Double Helix pedestrian bridge. A joint venture between Singaporean and Australian architects and engineers, the bridge had a lot of obstacles to overcome to get where it is today. Designers had to factor the tropical climate and the weight of materials into the design without compromising on the smooth curves they envisioned. 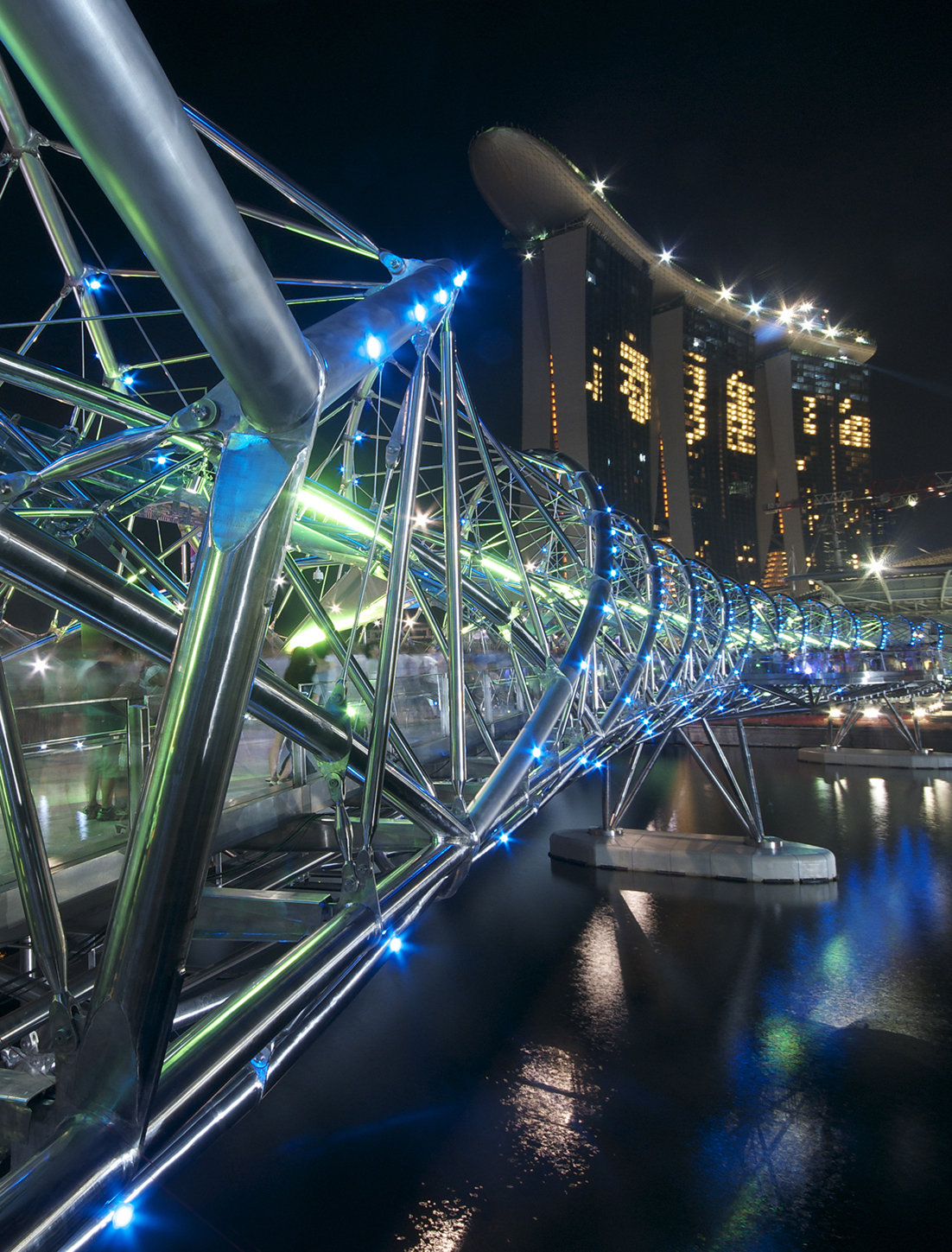 Curves in all the right places. Image Credit: William Cho

While China likes extreme designs, Singapore is drawn to curves. The island nation’s other standout structure is the Henderson Wave bridge. It is both the highest pedestrian bridge in Singapore and the wormiest. When night falls, it becomes a giant, rolling glowworm in the treetops. This is what it’s insides look like: 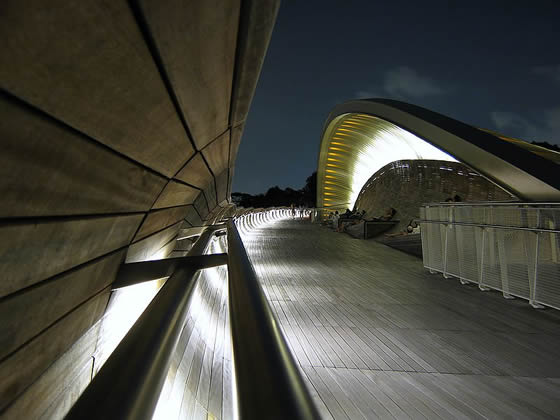 Nicer on the inside than you’re average worm. Image Credit: World Top Top

France: tallest bridge in the world

China may have the longest bridge in the world but France has constructed the tallest. The Millau Viaduct has pillars taller than the Eiffel Tower. The bridge has won a lot of engineering awards and is generally considered one of the greatest engineering efforts of our (known) earthly history. 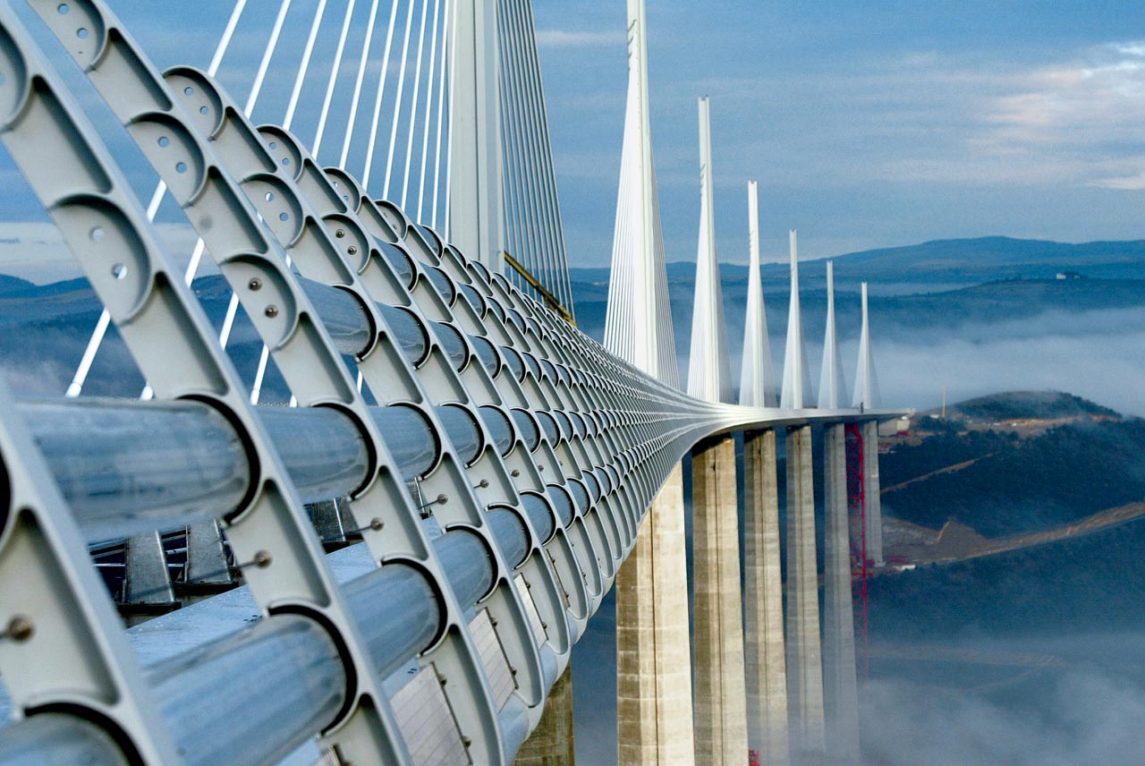 Scotland: a bridge for boats

The Falkirk wheel is an amazing example of a mechanical bridge that moves to carry boats, not make way for them. We’re going to let the video do most of the talking on this one because the narrator has the most soothing Scottish accent. Something we just can’t capture in text. 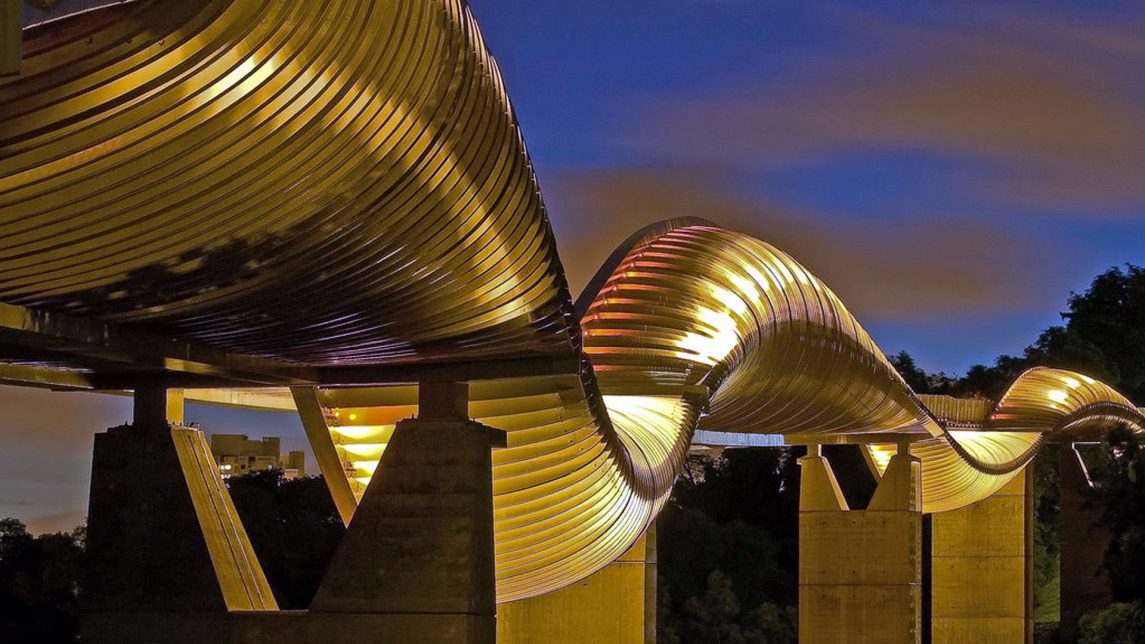 Article Name
The World's Most Epic Bridges
Description
Some of the most spectacular examples of the human drive to explore extremities can be seen in the world's latest, high-tech bridges.
Author
Krystle Richardson
Publisher Name
Machines4U
Publisher Logo