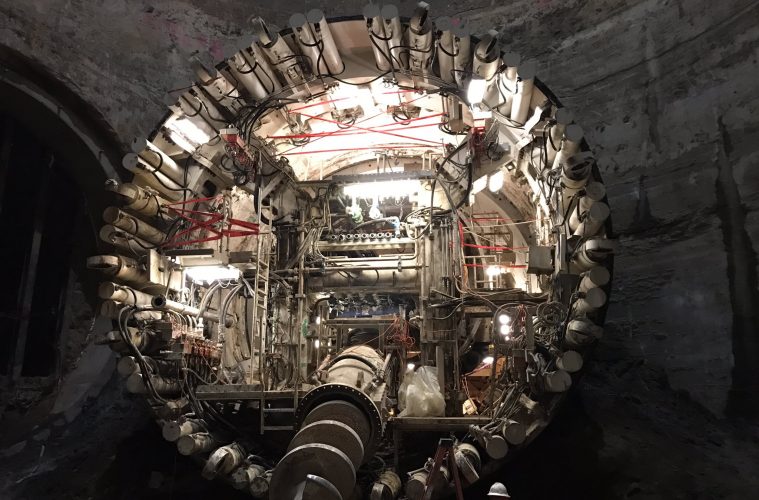 Believe it or not there are better ways to penetrate the earth than to train your Golden Retriever to dig on command. Burying into the earth’s core has been made easy with innovations in the rigs, but when your question is how deep? You’ll need to understand the difference between drill mechanisms.

From the outside, drilling rigs are a mystery. There are an indeterminate amount of acronyms and industry jargon, so much so that you might experience the nostalgia of high school Shakespeare. But with a little guidance, it’s not so difficult to figure out. Just don’t expect reading about drill mechanisms to be as exciting as Deepwater Horizon.

So far, we have been able to drill around 12 kilometres into the earth. That’s because drill bits and rigs are constantly evolving to suit specific jobs and to adopt to new technology. Out of these adaptions three drill mechanisms have become prevalent for drilling into layers of sediment. These are the diamond core drill, the air-percussion drill and the rotary drill. All three of these drill mechanisms are unique in their utility.

Percussive drilling is the most efficient way to tear shallow but precise holes into the earth’s crust. This mechanism is perfect for drilling blast-holes for quarries and mines, or for concrete anchor holes in construction. For holes around 40-50m deep, the percussion drill will be your best bet. Although this technique can also be used to dig boreholes as deep as 300m.

The percussion drill works by repeatedly raising and dropping a large hammer bit into a well, each time removing a layer of sediment. The hammer is usually formed from hardened steel with carbide used on the bit. The bit will often be shaped like a chisel and depending on the method of percussion drilling, may rotate each time it is lowered into the hole. This hammer will be attached to a powered cable system that will lift and drop the bit.

This technique has existed through the ages. It used to require a hefty amount of manual labour, and in some third-world countries, it still does. The manual predecessor to cable or rope percussion drilling works on the backs of labourers. A team will pull a rope attached to the hammer (weighing 65-125lbs) and then release, dropping the bit onto the layer of sediment below, before raising the hammer again.

This technique is still used to reach water in some African nations. Manual percussion drilling uses water to create mud in the pit of the well. Next a hollow tube that traps the mud is lowered into the well. This tube is then lifted to the surface and cleared. In air percussion drilling the hammer will be driven by compressed air, with the rubble being cleared by the air returning to the surface. 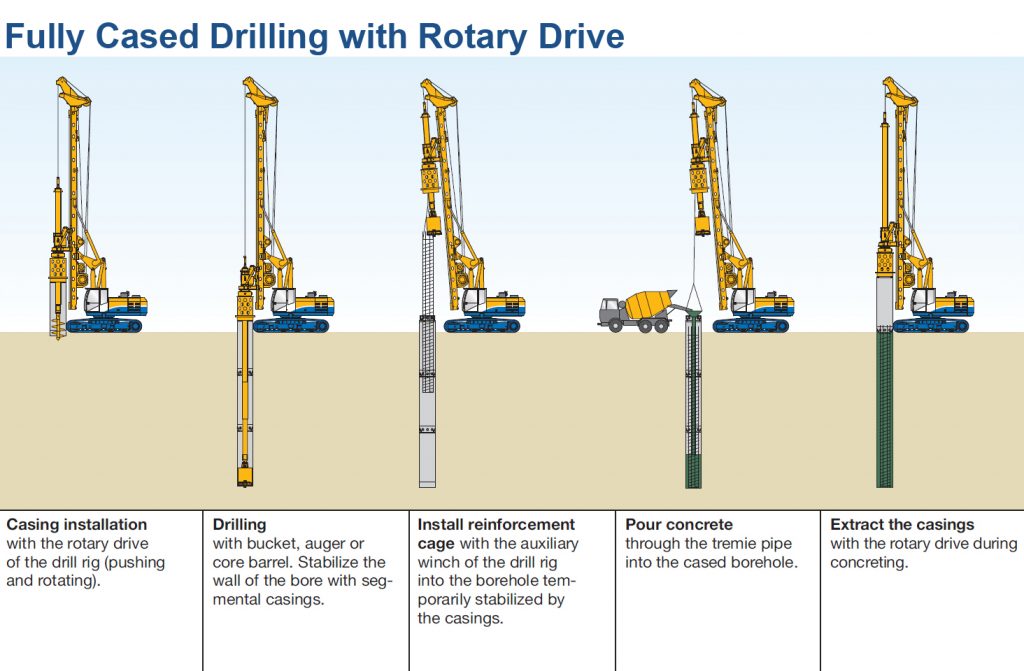 The rotary drill is another drill design that has been around since B.C. Early designs for the rotary drill were crude, some involving a mule fitted with a drilling device that would rotate as the mule walked in circles. However, it was renaissance man Leonardo da Vinci who’s early ideas formed the foundations of the rotary drills we use today.

Contemporary rotary drills require a different kind of ass to work. These drill mechanisms will use a sharp rotational drill bit, made from diamond or carbide, to crush its way into the earth. As the bit rotates it will remove sediment by burying into the rock with a sharp tip and serrated sides.

Why Has It Become So Common?

This drill type has become common within construction and mining industries due to its cheap functioning cost and ability to dig tidy, deep holes. Unlike percussion hammer bits, rotary bits are the same length throughout. The holes dug can then be smaller in diameter. These bits changed oil industries by offering an alternative to the increasingly volatile percussion drills that were constantly causing oil fires or eruptions when reaching high pressure oil wells. These drills will commonly be used for direction boring when accessing oil or gasses.

A rotary drill works with hoisting, rotating and circulation equipment. These separate functions lift the tool bit, rotate it, cool and lubricate it. They are powered by a pneumatic, or electric engine capable of high torque. The well being created is also reinforced by the drill bits metal casting. It is later reinforced by stronger castings inserted by an auxiliary winch.

As the rotary drill can be mounted to a truck and easily ported from site-to-site, it has incredible versatility. The larger fixed rigs are more commonly used for the deep stuff, like the kind of stuff Aaron Eckhart was digging for in The Core. These rigs, while not quite able to reach the centre of the earth, give it their best, burying as deep as 6000m as a standard.

Diamond core drilling is more precise than its offshoots of earth burying. Where the rotary and percussion drill mechanisms chip or crush the earth beneath tools, the core drill type is able to pull a slither of rock delicately from the earth (picture pulling a splinter from your toe). This core of earth is then used by geologists to conduct mineralogical, structural and petrologic studies. More simply, it tells them if they’re sitting on a buried gold mine.

Core drilling works with a circular bit made from diamonds added to a hollow metallic matrix. The metal will slowly wear from the drilling allowing the diamonds to be exposed within the bit. This allows for the drill to power through the hardest of rock materials. Once the drill bit reaches its desired depth, a wire-line device will extract the earth within the tube. The diamond core drill uses water in the drill pipe to manage the heat caused by friction. This also reduces the wear of the bit.

This mechanism is not used for just making a hole. Diamond core drilling is important for geological analysis. By examining the extracted core a geologist can determine the relationship between the rock layers and examine the earth’s condition in fault zones. This technique has advanced earthquake research and extracts segments of earth as deep as 300m with a diameter of 85mm. 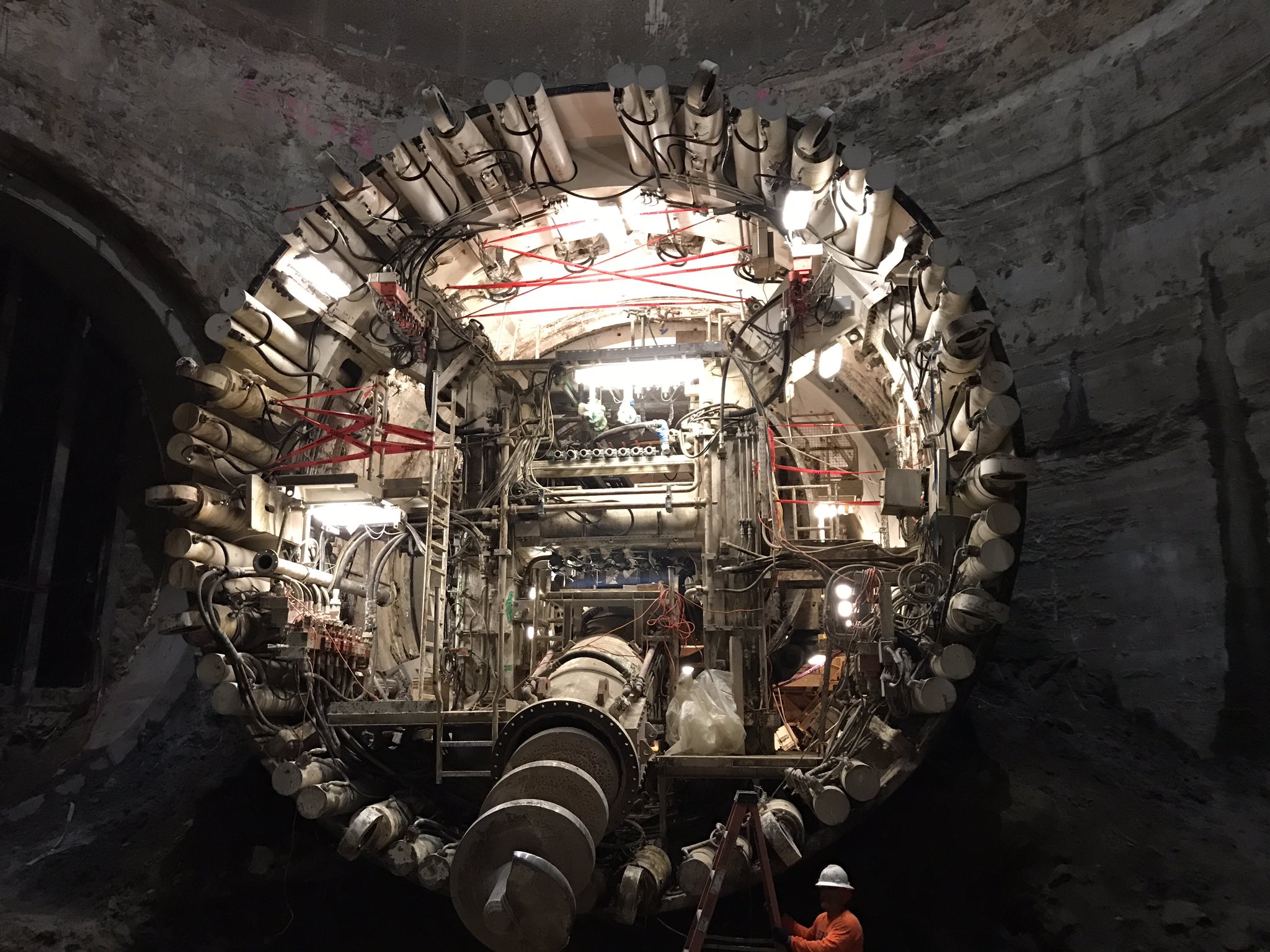 Article Name
Diamond Core, Rotary & Percussion Drilling—What's The Difference?
Description
Whether you're trying to bury to the center of the earth or removing a rock core for examination, there's a drill mechanism for you. Diamond Core, Rotary & Percussion Drilling all have unique applications and uses.
Author
Jake Sheehan
Publisher Name
Machines4u
Publisher Logo