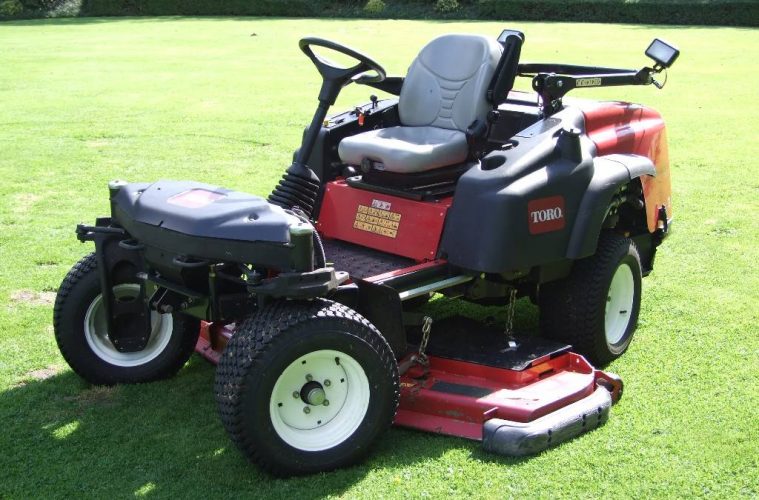 I happened to come across a documentary the other day about the evolution of landscaping. Sounds about as riveting as watching grass grow, I know, but I found myself strangely fascinated by the way land mowers have progressed over time. We’ve gone from pushing those dinky little non-powered tools around, to cruising our lawns on them and even putting them on a remote. We’ve definitely worked out how to put the fun into gardening. I’m no hardcore grass enthusiast, but I’ll take a 4WD mower over a push-around model any day. Which is why I had such a great time testing out today’s review model: the Toro 4WD Quad Steer Groundmaster 360.

Apart from being an absolute mouthful to pronounce, the Groundsmaster 360 is (as the name suggests) a master of maneuverability. The superb, all-wheel steering functionality gives this cutting machine unparalleled mobility in the field. It also has a 4WD option feature that locks the rear wheel straight while allowing the front pair to maneuver like a car.

I love the Groundsmaster 360’s ergonomic design. True to its name again, the line of sight has been cleared from all angles, giving a genuine 360-degree feel. The controls have also been neatly placed within the reach of our fingertips for ease of access and better transition.

Another notable feature of the Groundsmaster 360 is its productive design and attachment system which allows operators to do more jobs than just cuttin’ grass. In my opinion, this gives it a real edge over other brands, making it one of the most dynamic mowers in the market.

The Groundsmaster is backed by a four-cylinder liquid cooled 36hp Kubota diesel engine that can start in a flash and runs and powers this mower to travel up to 23km/hour. Then like its predecessors, the 360 also boasts a high-quality design for its deck, made with some of the most durable materials in the industry.

The manufacturers have built the Groundsmaster to perform even on tough and challenging terrains. It’s exceptional balance and mobility play a huge part in this, aided by its hydro-static drive system and wider wheelbase. These features allow the machine to avoid common mishaps such as tearing the turf when making a sharp turn or trimming around trees.

You’re going to be the one riding this mower. So if you can get one with all the functionality you want that’s comfortable and also looks good well, you’re laughing. The Groundsmaster 360’s ergonomic and highly efficient design doesn’t only boost productivity, it looks good. From afar and from the operator on deck.

After a careful look at the TORO Groundsmaster 360 Quad Steer, it’s easy to see why it’s been such a huge hit in the market. With its beautifully planned, optimally functional design, the Groundmaster is a versatile mower, perfect for both personal and professional use. Considering its value for money, Toro’s offering should definitely be on your list if you’re considering a new mower.